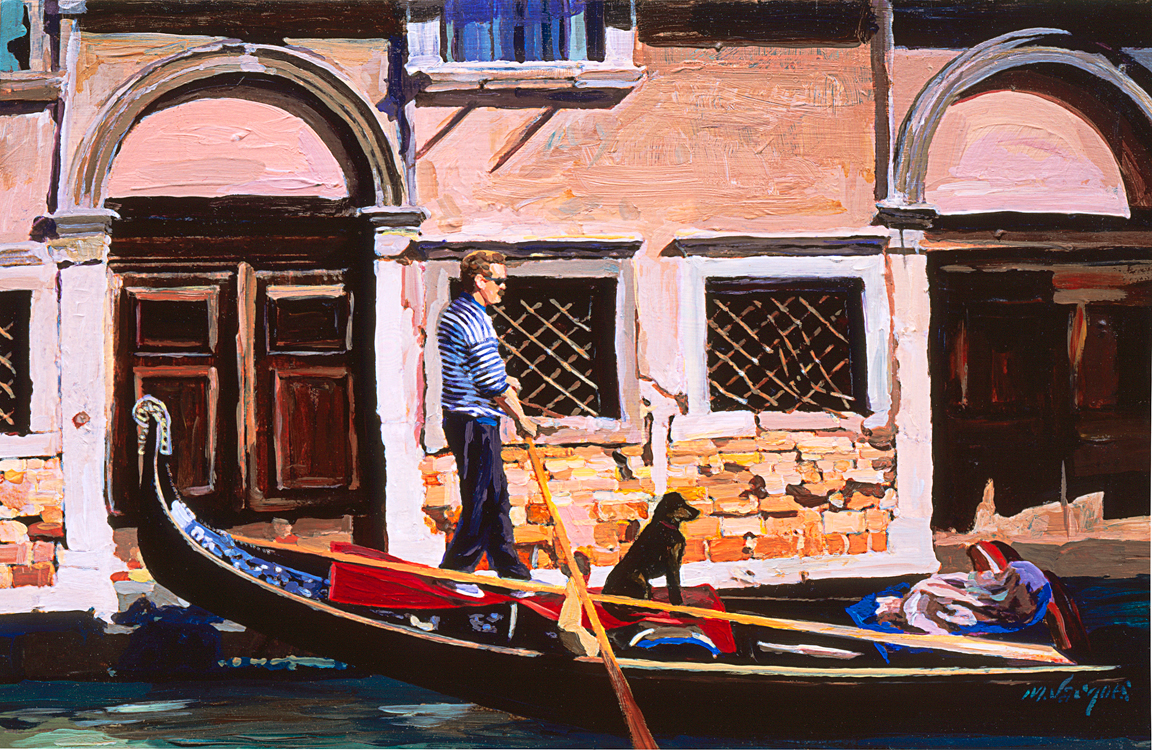 Sometimes artists like to pretend by placing themselves as an actor in their visual play. In this painting, I imagined myself with a faithful dog, deftly maneuvering my way through the narrow waterways of the beautiful Italian city of venice. I like to think that it puts me in a long line of my art ancestors. The striped shirt, the sunglasses, the well-behaved dog, and the ship-shape organization of items stowed away is how I would conduct myself. As long as I’m dreaming, I’d have a great, strong, mellow, voice that would please all the visitors as I slid along the water’s surface, singing (in impeccable Italian) romantic songs with great emotion!

Drawing is important to me when starting a
painting because I’m able to organize my composition
in line much like the skeleton organizes our bodies by giving
them the underlying structure. By the way, being able to draw
is a skill anyone can learn. I’ve taught hundreds of people
over the years and I know it can be done…it’s a matter
of following directions and learning to really “see”.
If you know how to write, you already know
how to draw. What’s the difference?

While painting on location in France, I noticed a lot of commotion from some people standing thirty yards away in this scene. The tall, muscular man with his hands on his hips seemed to be the instigator. His large dog looked to me like he was imitating the critical stance and disapproving looks of the small group. The French sounds the group emitted were sharp and staccato. Curious to see what the group, including the dog, was looking at, I stopped painting and positioned myself to the left and behind the agitated threesome to getagoodlookatwhathadcaughttheirattention. Downthestreet,aboutahundredyards, two men wearing moving-company jump-suits with logos on their backs were carefully lifting what appeared to be gilded furniture, much as you would see at Versailles.

The group’s disdainful reactions reminded me of an expression my mother often used: “Jealousy rears its ugly head once again”. We’ve all been guilty of jealousy at one time or another. It’s not a very nice feeling—one likes to think of oneself as generous of spirit. Satisfied that I had discovered what was going on, I went back to my painting.

As I began painting the blue Volkswagen Rabbit parked to my right, it reminded me of a time when I was in desperate need of a car. “Put it out to the universe!”, my California friends said. Coming from the east coast, Thought they were nuts but I was game. So I told everyone I knew that I needed a free car. To my surprise,my lawyer friend Bob still had his car from college, and he was willing to give it to me because he thought I would appreciate it and take good care of it. After all, it was his baby, full of old memories and still in good shape. Plus,it was a red Volkswagen convertible! I had that car for several years and was delighted to pass it on to a good buddy of mine.

Children will try anything. Watch how confidently
they paint or draw—they just don’t hesitate. They know
how to take and bend things. That’s what I’m trying to do
as an artist. The only difference is that I have been trained
to use paint but I had to figure out what I was excited about
in my heart…what I was truly passionate about. That’s
what my pictures reflect. It’s about sharing instinctive
experiences with your audience. If I do it right, people
will understand what I’m trying to say without my
having to verbalize what the painting is about. 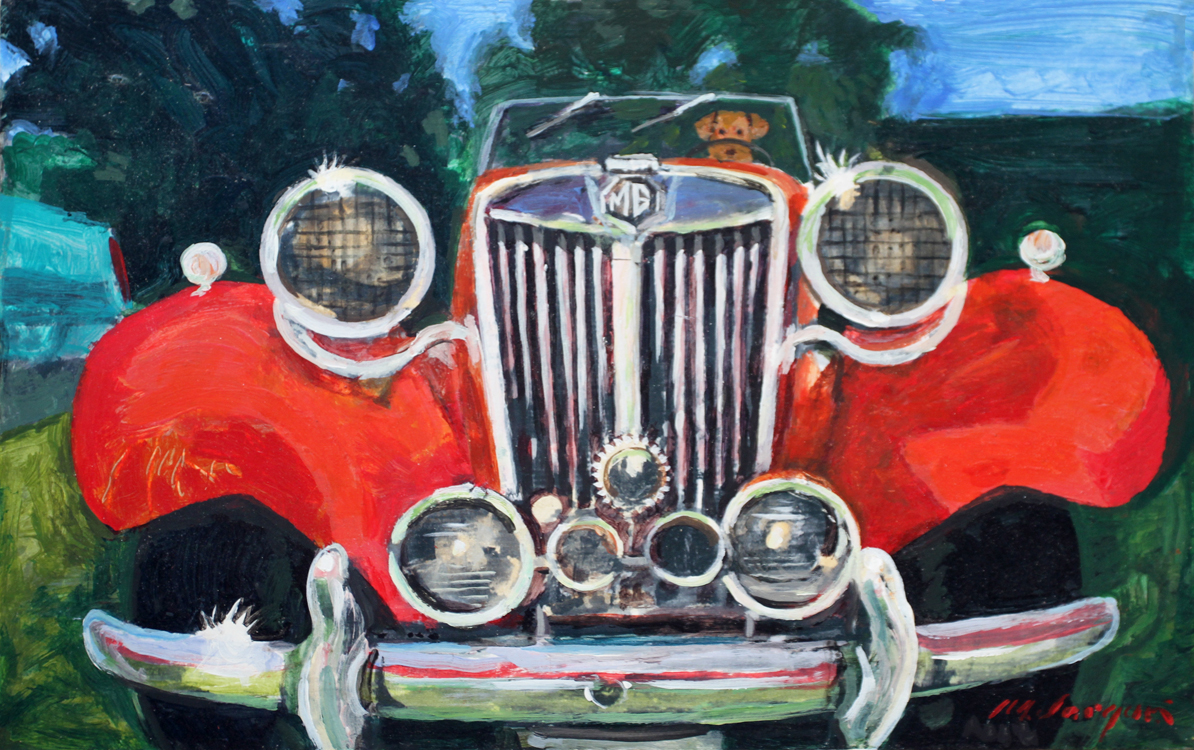 My airedale was like a first child to me. She was the runt of the litter, and came from a puppy mill in oklahoma. At the time, I didn’t know anything about the mistreatment of dogs in such places. When she arrived at the pet store at the mall, I was so excited! In the first five minutesof seeing her, I decided to call her Wilhelmina, or Willie for short. I’ve always liked it when girls have male names—Michael, Sam, Joe, or Alex. Willie had a very rough start with rickets, worms, and dehydration. The veterinarian I brought her to that evening was angry with me for purchasing her from a puppy mill. He said to me, “I would send her back for a refund. The only good thing about your dog is her heart. It is very strong, but she will probably die on her return trip. If you keep her, I suggest that you tie her up in the sun daily so that she can get a strong dose of vitamin D, lie down next to her, pet her, kiss her, stroke her and snuggle with her. You will need to replace her mother from whom she was weaned too early. This treatment may save her life. She should have been with her family of brothers and sisters for at least ten weeks, so that she would be socialized and stronger. Your dog was shipped in a box at just six weeks. Not good!”

Two months later, I brought Willie in for a check-up. The veterinarian came in and said, “This new dog is more like it, Mike. That other dog was a mess!” When I revealed that this was not a new dog but was Wilhelmina, his jaw dropped. He could scarcely believe that this was the same dog. He shook his head, and said, “oh, the power of love”. In this painting, Willie takes her usual position in my MG as I go about cleaning it. She loved sitting in the driver’s seat. She lived to be 12 years old.

When shapes are repeated in nature or even in urban
environments, my eye responds. Variety must be maintained
to some degree or the audience can become bored. Always treat
your audience as intelligent people; don’t provide too much
information so they don’t feel insulted. Just give the viewer
enough information and let them fill in the rest
as poetry does for its readers.

These Ponderings & Musings are taken from my book
THE BLUE RABBIT & OTHER DOG AFFAIRS
specifically published to help homeless children.
Find out how you can help us help them!